NBN is here, but things are very different to the past.
Outlined below with no bias to any reseller services, are the considerations needed.
(Terminology is defined far below)

NBN runs on fibre to the Exchange and various cable/fibre combinations to the premises,   but now lacks the fallback 50v power that once ensured voice communications.   VOIP replaces the old landline with a handset running over PSTN (2-pair)  50v current copper wiring.

With the NBN / VOIP architecture,  there is no point going to the expense of a Uninterruptible Power Supply (UPS) at the premises,  to try and keep any 240v appliances running, as the Exchange may not be powered at the other end anyway.   The details are outlined here, and are very important to understand, in the event of any Emergency, like power outages,  bushfires or national emergency.  Fallback considerations are needed.

History note: Back around 1912,  the designers catered for the possibility that a catastrophic event might knock out all the power,  (SEC 240v supply in Victoria for instance, in those days), whilst the humble telephone using the original  PMG network of the day, could still place an emergency call.  That was smart thinking in 1912, as war broke out 2 years later and people started to think about matters of urgency like these.

Some providers of Medical Alert Systems,  require the ability to place a phone call to personal contacts on ‘000’ emergency services.  Therefore the Alert ‘system’ must be compatible to the Modem/Router  that is at the premises, connected to the NTU termination of NBN.   Some other combinations of say, 3G/4G fallback in times of power failure are worth considering. Check if the ‘Alert system, you are contemplating,  has a way of coping with power outages on NBN/VOIP networks.

Much controversy exists about speed,  with the roll-out of the NBN.

The original 2010 implementation was based on fibre optic connections all the way to the Premises (FTTP), and early adopters have this, and enjoy the originally touted speed promises.

The revised design around 2013 saw the change to fibre optic only between Telephone Exchanges (FTTN),  and the utilisation of older, existing COAX CABLE to the premises  (HFC).    This combination of fibre over to COAX (known as HFC) wiring, means that the speed of transferring DATA, (including VOIP data for voice calls over the internet),  is reduced.

A significant number of consumers experienced a speed of service that was less than their expectations.   With the huge number of resellers providing NBN solutions,  the alleged speed offering,  when implemented over HFC (the Hybrid of Fibre and Coax)  was a vastly reduced outcome compared to the early adopters of FTTP (pure fibre all the way to the premises).  The ACCC brought to a head,  the need to compensate such consumers,  and brought about a suspension in the roll-out of the NBN until the service levels, speeds and an overall clarity of what was being offered to consumers was improved.

Indications suggest that the suspension could be in the order of 6-9 months.
ie:   http://www.theaustralian.com.au/national-affairs/cable-fail-as-rollout-of-nbn-put-on-ice/news-story/d7891112342e9f646bc54fcaddfd1f61

For new high-rise (apartment) developments,  such special projects seem to gain an exemption to this suspension, and NBN is provided even into areas where other existing single premise consumers live but are not yet entitled to NBN.   But this leaves a problem for those who have moved house,  or built a new house on freshly developed estate land,  when applying for services where NBN roll-out had already began (prior to the suspension).  These consumers are in limbo, unable to get NBN due to suspension, yet not allowwed to order the old ADSL or COAX based services because NBN has started in the area.  They are left to use poor speed, expensive alternatives of 3G/4G wireless broadband or some other proprietary services not bound by the rules of NBN Co.

Call 1800 227 300 to be registered on the NBN Medical Alarm Register, entitling you to use alternative ADSL2+ even if it needs new PSTN copper wire cabling during the NBN suspension.   Residents requiring emergency call services,  need to have access to either  PSTN lines (the old 2-pair copper wires that have existed since 1912),  or they need to consider 3G/4G mobile connection equipment as an alternative.  Normally,  since NBN has been introduced,  additional deployment of PSTN copper wiring is NOT available.  But residents in this ‘medical’ situation are an exception.

A sideline option for residents on the Register, is that they can apply for old style ADSL2+ services running digital internet services over the PSTN copper wiring for a period of 18 months beyond the otherwise cutoff date of PSTN usage.   So this is a window of opportunity still for such consumers.  It is also a worthwhile consideration if their Medical Alert system of choice needs to work out how to deal with NBN/VOIP utilisation where there is potential lack of service when power outages occur.

Some security systems have a callback-to-base service so that a monitoring company can be alerted of a security matter at your premises.  This requires the security alarm system to be able to place a call.   So there must be compatibility of the alarm system to MODEM/ROUTER,  and the concerns mentioned when there is a power outage, also needs to be taken into account.  For instance,  during a Security event,  there is the probability that power can be cut,  and therefore, any security calls over the NBN would fail as the Modem/Ruuter is off the air.   In this situation where the power cut is local to the premises,  then a local UPS keeping both the alarm system AND the NBN Modem/Router equipment AND the call-making devices alive on standby battery, could be a solution to the service being successful.

There are a variety of phones that have features for residents who have a hearing impairment or sight impairment.   If they are reliant upon 240v, then consider the alternatives that may be needed in the event of a power outage.   Also, consider their compatibility for use on the VOIP equipment provided  by the selected  NBN service.

Disaster Planning calls for alternative means of communication, in the event of power outages,  equipment failure, or infrastructure damage.   Such planning is no different to travelling the vast areas of outback Australia as a grey nomad., in terms of just phone call access.  Mobile phone coverage is limited,  and if mobile towers have power outages, such systems are dead in the suburbs as well.    Many examples of mobile outages (failure or power) like this exist:
ie:  http://www.standard.net.au/story/4932737/telstra-blackout-leaves-town-in-phone-cash-chaos/?cs=2452

Hence the reason why travellers look to independent alternatives like Satellite phones for instance,  which have no dependency on land-based technology.  But before going to that extent,  some common sense options exist,  such as having a spare mobile phone that runs through totally different base stations towers than the provider of the NBN services you use.   This is why emergency service crews still use the humble PAGER, as it relies on only a few distance base stations with power backup (generators).

Use this website to identify all the different tower locations near your residence, and who uses them.   Then consider selectging alternative vendors on different towers for your fallback.

If all these system are failing,  you shouldn’t have still been in the premises – but that’s a whole new topic:  Disaster Planning.

Equipment that requires 240v to operate

The simple cordless phone in the home,  comprises a MASTER phone plugged into 240v  PLUS the source of the voice line, that was once a landline, or now a VOIP connection to the Modem/Router, which also needs 240v to operate.   Then there are other SLAVE cordless phones around the home which run over say  2.4Ghz  wireless frequency and run on batteries that get recharged in their docking stations.  But if there is a 240v power outage, the MASTER will not work, and therefore the SLAVE units won’t work either, because they require the MASTER to relay the 2,4Ghz wireless transmission.

You may have a laptop that has battery power, and you  might even have a UPS to extend the time of that battery during a power outage,  but the internet connection over NBN will still not operate, as explained above.   So Skype over internet or any such ‘communication’ equivalents are of no joy during a power outage.

Recommended solutions now or when on NBN

If you still have ADSL2+  for your internet before NBN requires you to migrate to NBN, and you have a Landline phone service running on the PSTN 2-pair wiring, then keep an old NON-POWERED phone handset on the main entry point connection to still place emergency calls enjoying the 50v DC current on PSTN.

But if you have an NBN connection with VOIP, then you will need to rely on an alternative Mobile Phone service in an emergency when there is a power outage.  To minimise the risk of the power outage that is affecting the Exchange area where your NBN is connected,  consider the adoption of a mobile phone that uses an alternative Base Station Tower that resides on a different power grid location (next township for instance).   If a town’s power is cut, then there is the likelihood of the Echange and the Towers also being affected.  Not all Exchanges or Towers have their own independent fallback UPS, Battery of diesel generator sets.   If your town does, then great. 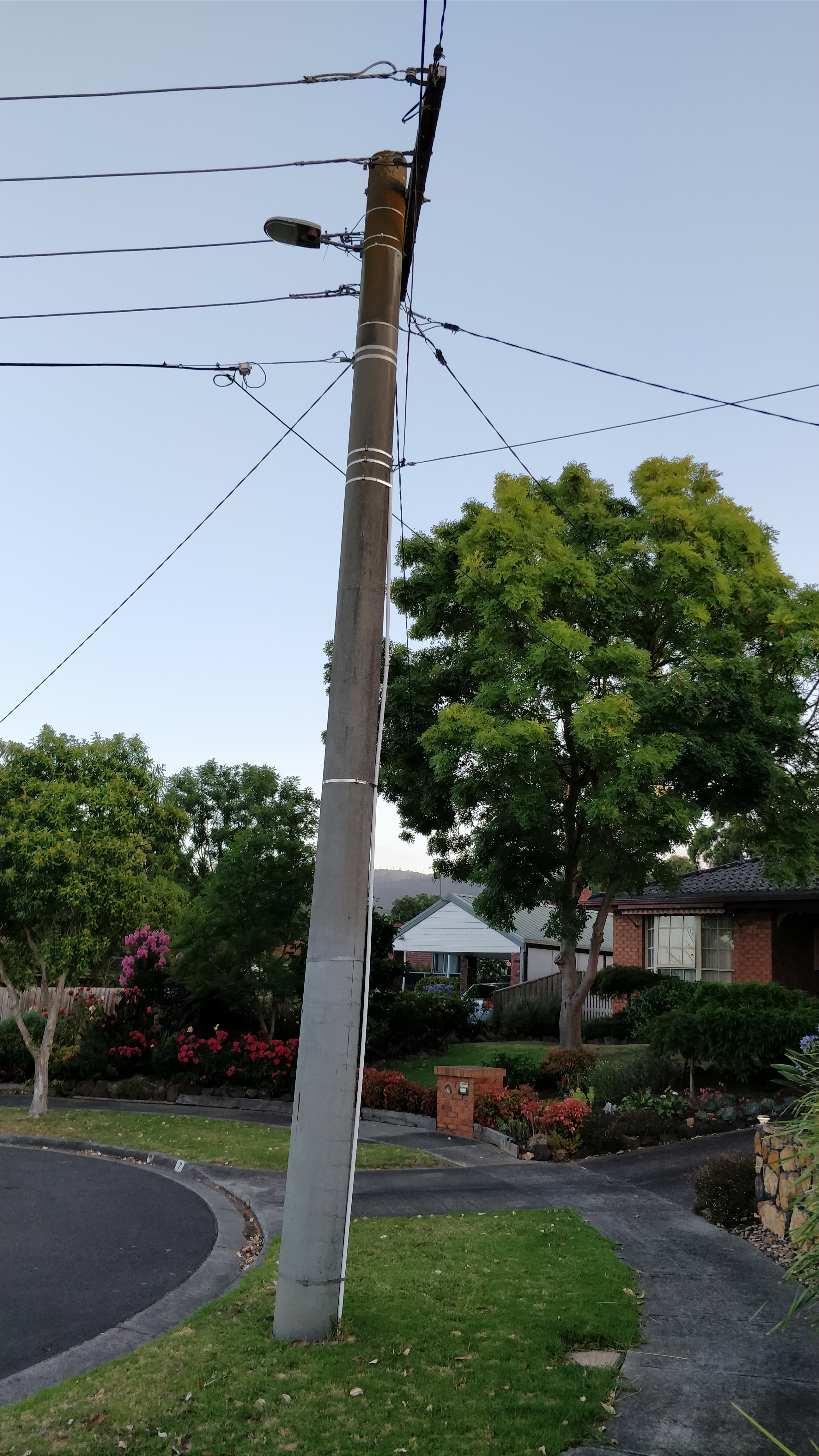 A typical 2-pair copper wire PILLAR (with hardened screw top cover removed)
found everywhere around Australia,  typically on street corners,  (Don’t hit one with a car!)
with those 50v powered wires linking to properties nearby for landlines and ADSL/ADSL2/ADSL2+.

And to the right,  a typical power pole with high voltage power at very top, street lights under.  The power company has
leased  (about 1m below the power)  provision for Optus to run their COAX Cable for their internet/Optus TV roll-outs
Notice the white concrete PIT to the right of the pole, on the verge, owned by Telstra for all PSTN and their COAX.
In this picture, Telstra has become a sub-leasee of the pole from Optus,  permitting them to run a white conduit
up the pole to provide the COAX cable service via OVERHEAD,  in this case, due to rock obstacles at the property.
Meantime, PSTN 2-pair copper wires are running from that PIT, underground to the premises, made when accessible years ago.

Hybrid Fibre Coaxial is where they may be using Fibre to the local exchange, but then the NBN Co relies upon the retention of existing Coaxial cable that runs from the nearby Telephone Exchange,  to your street (in the Telecom Pit in your nature strip for instance)  and then from that pit into your house where you get an NBN provided Network Termination Device (could be something like this:  https://www.arris.com/products/touchstone-cm8200-cable-modem/   )  which converts the signal to an ethernet signal/port for going to your choice of a ROUTER.

CORDLESS
Voice phone devices that you carry around which operate on say 2/4Ghz frequencies,  for use within the home, and connected to Landline or VOIP

NTU
An appliance (non powered) that terminates the Fibre or COAX connection inside your premises, of the NBN service cables

ROUTER
Sometimes part of an all-in-one  Modem/Router/Wifi/VOIP appliance,  it  is the technology that permits multiple users to connect
their appliances (PC, Phone, Printer,) simultaneously to the Internet service connection (MODEM end)

VOIP
The technology that converts voice to data, and transmits that data over the internet for a recipient to hear on their VOIP device (Phone)

Wireless
For connecting the premises to an external internet service using 3G / 4G connections to nearest Mobile Base Station Tower.

WiFi
For transmitting a signal without wires, within the premises over a short distance of realistically say, up to  150ft inside.

NBN
The name given to the infrastructure:  National Broadband Network

NBNCO
The company responsible for rolling out the NBN infrastructure 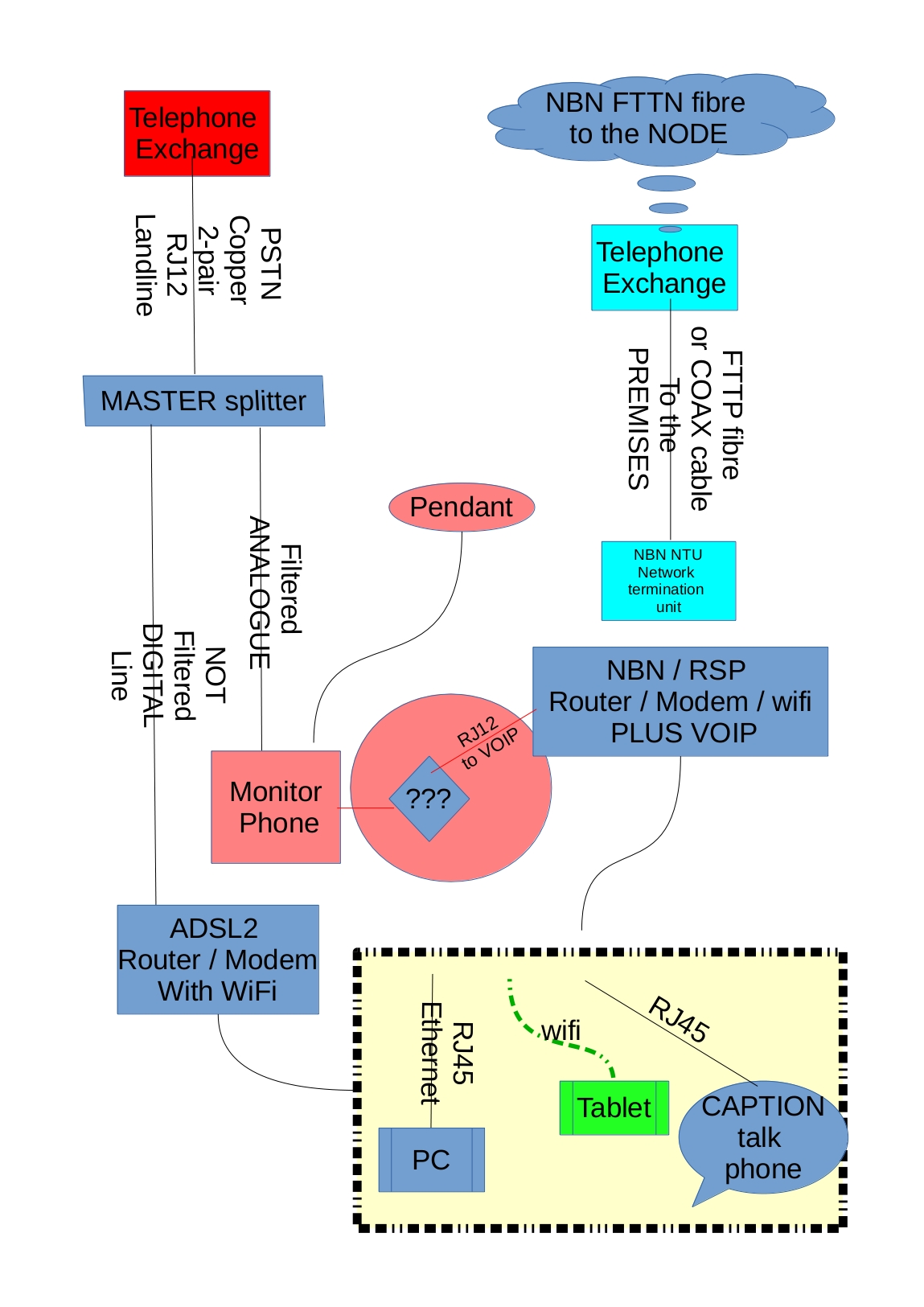